Magnetic susceptibility measurements allow researchers to understand how a material responds to a magnetic field, which can reveal a great deal about the magnetic identity of a material. To interpret their data, researchers often turn to the Curie-Weiss law—an equation that describes the magnetic susceptibility in a material as a function of temperature. If applied correctly, it can reveal a lot about a material. The trouble is, it’s not always easy to see when or how the Curie-Weiss law applies to a data set.

A new review article from Alannah Hallas, Principal Investigator at the Stewart Blusson Quantum Matter Institute (Blusson QMI) and Quantum Pathways undergraduate student Sam Mugiraneza, published today in Communications Physics, gives a pedagogical overview of the interpretation of magnetic susceptibility data. This article was written to give the research community a straightforward guide to the Curie-Weiss law and how to apply it to new materials with distinct magnetic properties.

In the Hallas lab, researchers design, grow and study new quantum materials. They combine ingredients on the periodic table to create interesting and potentially useful materials not found in nature with the goal of enhancing their quantum properties. When a new material is discovered in the Hallas lab, one of the first steps to characterizing its quantum properties is to perform a magnetic susceptibility measurement, which can quickly reveal the magnetic identity of a material. However, while collecting the magnetic susceptibility data is usually straightforward, Hallas observed that newcomers to the group often struggle with making sense of their data. 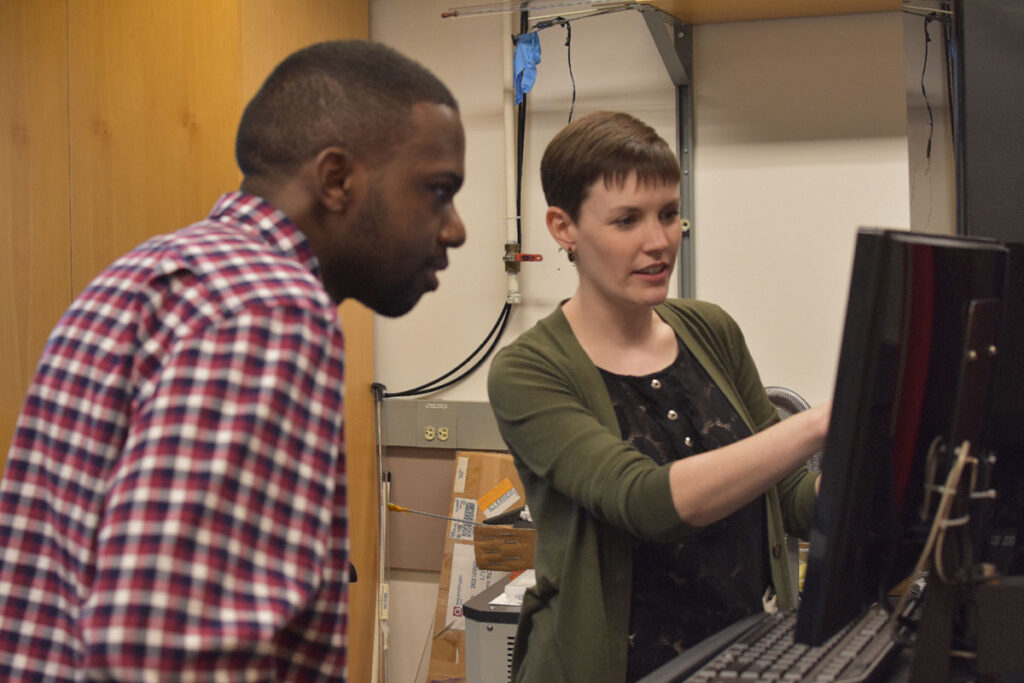 When Sam Mugiraneza joined Hallas’s lab as a co-op student in early 2020, he had plans to discover new quantum materials and study them with magnetic susceptibility measurements. When the COVID-19 pandemic forced the closure of UBC labs and learning spaces only a few months into his research term, Mugiraneza was still learning to apply rules in solid state chemistry to understand the materials and techniques used in the Hallas lab.

“Alannah identified this gap,” said Mugiraneza, who recently completed his BSc in Chemistry at UBC. “The theory of magnetism is well understood, but applying the Curie-Weiss law in a meaningful way can be challenging, especially to newcomers. Our idea was to write the procedure down clearly and build a toolkit in order to demystify the process for others.”

Hallas and Mugiraneza wrote most of the paper from April through June 2020, and when UBC researchers were able to return to their labs later that summer, Mugiraneza was able to begin working with real experimental data, finding examples of where the Curie-Weiss law worked and where it broke down.

“We’re at a point where the equipment we are using is very sensitive, like the Superconducting Quantum Interference Device (SQUID) Magnetometer, and can measure magnetic data very precisely and under optimal conditions,” said Mugiraneza. “The result is that you are able to generate a lot of data, and so analyzing it effectively is very important.”

Every material has slightly different properties and can behave differently under specific conditions, so a key component in Mugiraneza and Hallas’s article is exceptions to the rule—materials that don’t follow conventional Curie-Weiss behavior and an explanation of the underlying physics. The goal is to help researchers determine which factors in their material might be relevant to a range of outcomes.

“We’ve written an overview of all of the contributing factors that could be present in your data, making it look weird,” said Mugiraneza. “One of the very interesting parts of the article is where we go through the different contributions to magnetic susceptibility data and identify the factors that might contribute to the Curie-Weiss law breaking down so that the user can see how to fit data into the equation so that the data agrees with the law.”

Mugiraneza completed the Quantum Pathways program at Blusson QMI and an 8-month industry internship before taking on a co-op position in Hallas’s lab. Having recently completed his undergraduate degree, he’s looking forward to big changes: Mugiraneza will begin a PhD program in materials chemistry studying applications in clean energy storage at the University of California-Santa Barbara in fall 2022. He credits his undergraduate research experiences for teaching him the skills to be successful in graduate school.

“Working with Alannah has been fascinating and her guidance was so helpful,” said Mugiraneza. “The opportunity to participate in such a range of experiences in research has helped me to know what I want to do next, and to be ready for it.”

Last year, Marcel Franz and colleagues proposed a high-temperature topological superconductor made from two monolayer-thin sheets of copper-based materials with...