In the future, a visual freshness sensor could replace best-before dates, reducing food waste and potentially eliminating a significant contributor to climate warming. An indicator strip on a vial of insulin could tell you if the drug had been damaged by heat exposure or if it has expired. Smart sensors using sustainable, easily sourced materials could solve a variety of modern problems. New research from Mark MacLachlan and colleagues has produced a colour-changing, tunable material using shape-memory polymers that integrate well with organic materials and could be produced at low cost.

Shape-memory polymers are flexible materials that can be altered by heat and pressure, but that “remember” their original form and can return to it. Postdoctoral fellows Charlotte Boott and Miguel Soto, team members with MacLachlan, embedded the polymer with cellulose nanocrystals (CNCs), a type of crystal that is microscopically thin: 1,000 of them stacked end-to-end equal the width of a single human hair. The crystals are derived from cellulose, a stiff material found in plant cells—and cricket droppings (more on that later)—that is most commonly found in paper. They are iridescent, reacting to different wavelengths of light, and can be tuned to selectively reflect certain wavelengths, such as ultra-violet (UV) or infra-red light. 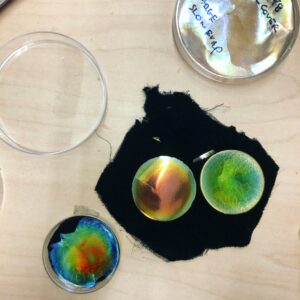 Samples of CNC films produced by Mark MacLachlan and colleagues.

CNCs are useful, but brittle, thinner and delicate when formed into films.

“CNCs have appealing features as reflectors, or for use in security features or opto-electronics,” said MacLachlan, Professor in UBC’s Department of Chemistry, Blusson QMI Principal Investigator, and Associate Dean of Research & Graduate Studies, Faculty of Science. “By embedding these in a thermoplastic polymer that preserves their chiral nematic order and structural colour, we may have found a way to deploy these in potentially useful applications ranging from flexible electronics, sensors, and biomedical devices to aerospace and robotics.”

The hue of a CNC film comes from structural colour, which occurs when light-reflecting materials are stacked in such a way that they produce the illusion of colour. Blue colouration found in nature is often an example of structural colour. Most often, the colour blue as it appears in bird feathers or butterfly wings, comes from periodic, stacked layers of materials such as cellulose, or its close relative, chitin.

The structural colour in MacLachlan’s embedded CNCs can be altered by applying pressure, so that the hue of the polymers appears to change from red to blue.

“The heat and pressure we can apply to these is variable, and the material is able to return to its original structure up to 15 times after we change the shape-memory polymer,” said MacLachlan.

Though it is too early to think about commercial uses for shape-memory polymers such as these, this work represents critical foundational research. MacLachlan and colleagues are using organic, inexpensive materials to produce films with many potential industrial uses.

“Cricket waste is almost entirely composed of cellulose,” said MacLachlan, who was given a freezer bag containing nearly a kilogram of cricket leavings by a cricket farmer in Oregon. In recent years, crickets have been seen as a potentially viable protein source for humans. “Who knows, maybe cricket byproducts will be a renewable source of clean energy or technology materials in the future.”