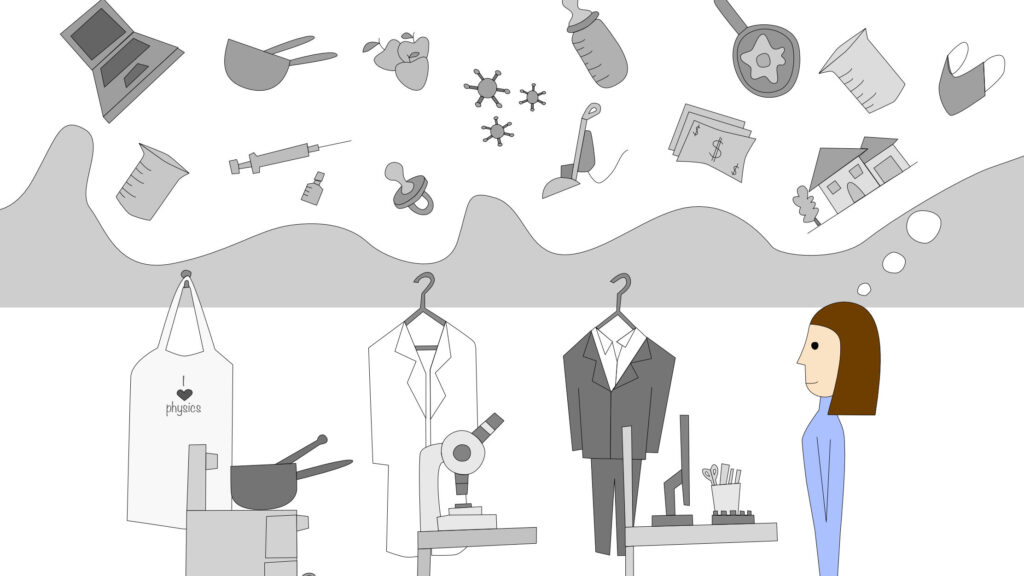 For many, the past year has intensified the weight of career responsibilities and domestic life, which have become intertwined like never before. For women in science, the impacts have been measurable: a 2020 editorial in Nature on the unequal effects of the COVID-19 pandemic on scientists reported that “all else being equal, female scientists reported a 5% larger decline in research time.” The decline was increased where women had a child younger than five years old, and further eroded with each additional child. A feature story in Nature in July 2020 said that, “for female scientists, the pandemic … poses a significant threat to hard-won gender-equity gains achieved over the past few decades.”

Gender equity in science has been the focus of intense research and numerous case studies over the past few years, but even so, meaningful progress to reduce and eliminate inequities has been slow.

“There has been progress in welcoming and including women in sciences,” said Natalia Bussard, Manager, Programs and Careers at the Stewart Blusson Quantum Matter Institute (Blusson QMI). “We do, of course, have a long way to go.”

A recent panel entitled “Women in Science: Equity, Diversity and Inclusion,” moderated by Bussard, gave researchers an opportunity to come together and discuss challenges for women in science. The panel, which took place virtually on April 6, was an effort to build allyship among Blusson QMI colleagues and discuss ways to address inequities, which have increased in the shadow of the pandemic.

“Barriers women in science face add up over time,” explained Bussard. “Many of the challenges are systemic, which means they can be hard to recognize and identify. Systemic barriers can be reinforced through day-to-day interactions often taking the form of subtle micro-aggressions. Groups with elevated power, such as male academics in our context, can play an important role in changing these dynamics. Men can share the burden of educating colleagues and pointing out these moments as they happen. While it is positive that conversations around gender inequality in science are now being welcomed, we need to begin taking things from discussion to action.”

“It’s that idea of death by a thousand paper cuts,” said Sarah Burke, Associate Professor in the Departments of Chemistry and Physics and Astronomy at UBC, and Chair of Blusson QMI’s Equity, Diversity and Inclusion (EDI) committee. “Over time these things add up, and they make people feel ‘othered.’ A comment one person may find innocuous will have a whole different meaning to another group of people, and we have to work on reducing unconscious biases among majority groups in science.”

Since March 2020, women have disproportionately been affected by job losses, childcare facility closures, and gendered expectations around caregiving and household duties. For female-identifying scientists, the impacts have often included increased workload as courses were quickly transitioned to online delivery, and fewer publications as labs closed with other academic responsibilities stretching workdays into evenings.

“It’s been a very hard year for women, and women of colour in particular,” said Burke. “We’ve lost that sense of community we get from seeing people who look like us every day, and while some of those communities have re-emerged online, it has been an isolating time for a lot of people.”

“The effect of that loss is a lack of visibility; we’re not seeing that other people are struggling too, and our female-identifying colleagues are juggling a lot of responsibilities that are often out of sight,” said Burke. “It’s great if people are able to find their people online, but we need to have those in-person interactions.”

Bussard concurs. “Women need other women, as allies and as mentors.”

Using our power for good

Research institutes such as Blusson QMI can help reduce the dual impacts of the pandemic and sexism on women scientists in a number of ways. Among these, Burke suggests, is creating a “bubble” for graduate students in particular, enabling them to focus on their research and academic achievements and encouraging them to seek collaborations and strengthen their skill-sets.

“We need to be empowering for our students,” said Burke. “It is important to protect their time, to highlight their achievements, and position them to achieve their goals. It is important for us to model an inclusive, supportive culture that champions student success.”

Men can reduce some of the barriers for underrepresented groups by listening to and amplifying their colleagues, ensuring that female and gender-diverse voices are heard and considered in places where decisions are being made.

“Often, a woman’s comments can be brushed off; it can be helpful for men to emphasize those points (with credit!), and point out when a woman’s perspective is being brushed aside in favour of a male voice,” said Bussard. “We all have a responsibility to educate and do better.”

At Blusson QMI, the work of implementing EDI goals is shared by a diverse team of faculty, staff and student representatives, so that the bulk of the work does not fall on any one group. According to Burke, this is critical: “EDI needs to be an issue for the people who have the power to advocate, especially those from overrepresented groups.”