The amount of radiation the sun delivers to the earth’s surface in a single hour could supply the entire world with electricity for a year. To harness the full potential of solar energy, however, scientists must first overcome some critical gaps in performance in order to convert sunlight into useful electricity. New research from investigators at the Stewart Blusson Quantum Matter Institute, published recently in Nature Communications, offers a theoretical framework for—and insight into how— semiconductors can be used for efficient energy conversion using the mechanism of thermionic emission.

Global energy demand is increasing at a time when deriving energy from fossil fuel sources continues to harm the environment. For decades, researchers have pursued cleaner, more renewable forms of energy, and for a long time photovoltaic (PV) solar cells—like those used in solar panels—have been at the forefront of capturing solar energy. PV devices are effective, but commercially established solar panels offer only around 20% efficiency, losing significant energy in the form of heat. Loss of heat means that the device doesn’t produce as much electricity; heat also causes the performance of the device to degrade more quickly.

The ability to transition to clean, renewable forms of energy at a global level is more urgent than ever, and researchers have been attempting for decades to increase the efficiency of existing solar harvesting technologies, including PVs. An alternative approach, thermionic energy conversion, a mechanism complementary to photovoltaics that is capable of exploiting heat, has been known to researchers for over a century.

Thermionic emission relies on heating a material to very high temperatures so that it emits electrons. In 2010, a research group from Stanford University proposed an interesting method to use optical excitation by solar photons to enhance thermionic energy conversion: their idea was to exploit both the quantum and thermal nature of solar photons, turning a problem into a benefit in order to maximize the energy captured by solar cells.

Like in a PV solar cell, a photon-enhanced thermionic energy converter can generate electricity, but crucially, it uses the energy of the solar photons that would be lost as heat in a PV device. Despite the promising nature of this approach, it has not yet surpassed the existing PV solar cells in terms of performance in experimental studies.

The Blusson QMI study, led by Ehsanur Rahman, Vanier scholar and PhD candidate in the Department of Electrical and Computer Engineering (ECE), demonstrated that while the idea of photon enhanced thermionic emission shows promise, there are still critical limitations to this approach to energy conversion. 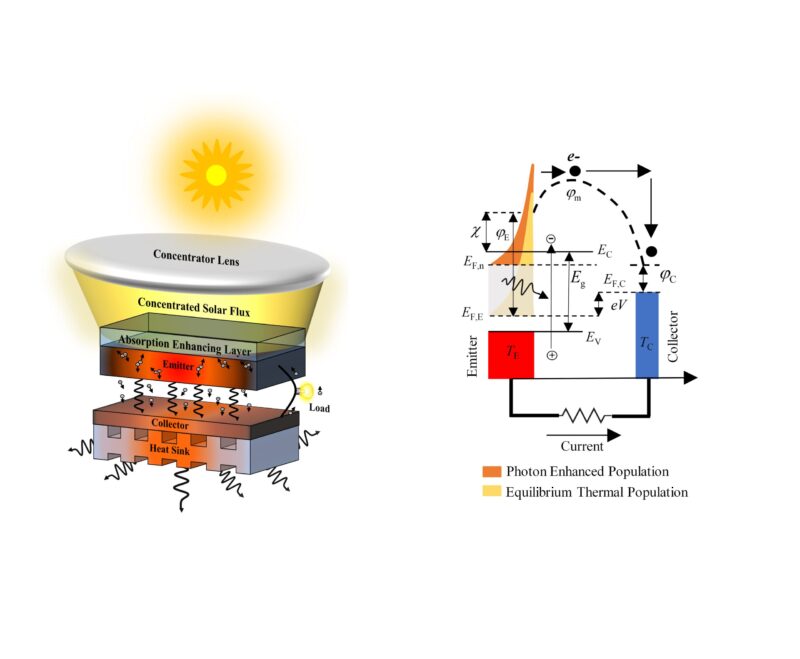 Apart from the engineering challenges, this new research demonstrates that there is a gap in our fundamental understanding of this new solar cell’s operational mechanism. Up until now, researchers had assumed that the photon enhancement effect (which can improve the efficiency of thermionic emission by further reducing the vacuum barrier for electrons) can be taken for granted in this type of solar cell; Rahman and Alireza Nojeh, Principal Investigator at Blusson QMI and Professor in the Department of Electrical and Computer Engineering, demonstrate that the photon enhancement effect may not always occur as expected.

“The realistic potential of this new solar cell concept is limited by several fundamental loss mechanisms,” said Rahman. “We believe our findings have the potential to elucidate the workings of this solar conversion approach and facilitate the design of an efficient thermionic solar cell that could one day surpass its PV counterpart.”