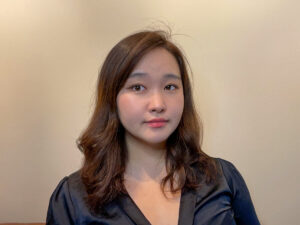 Kaho Saito is the Travel and HR Assistant and Blusson QMI.

Kaho Saito greets AMPEL Administrator Irina Romanova in Russian as she walks past the front desk in the Brimacombe Building, slowly and carefully, each syllable clear and deliberate. “I have been practicing,” she says. When she arrived in Canada from her home country of Japan in 2014, she taught herself English while working at Starbucks in Toronto. For those who work closely with Saito, one thing is clear: she can figure out anything, and then she gets to work.

Saito is the Travel and HR Assistant at the Stewart Blusson Quantum Matter Institute (Blusson QMI), but she has a hand in nearly everything, from supporting the coordination of the CM Seminars to updating the SiEPICfab website. She is the first point of contact for many of Blusson QMI’s external contacts, from speakers to visiting scholars. Her background in customer service – at Starbucks, and later at the reservations office at Air Canada – has provided her with skills that translate well into the academic research environment: she wants the people she works with to feel heard and understood.

Saito began working at Blusson QMI in August, 2019, and has spent much of her tenure working remotely. When travel was put on hold due to the coronavirus pandemic, she was able to explore new aspects of Blusson QMI and take on learning and development activities to nurture her professional interests; over the past year, Saito has taken courses in user experience design and business English.

She was also an early user of UBC’s new Workday technology, and has become an expert the administrative team at Blusson QMI can rely on.

“Kaho dived right into learning and trouble-shooting processes on the new Workday platform which came online at the beginning of November 2020,” said Aven Bendickson, Human Resources Manager. “Workday has been a steep learning curve for many of us, and Kaho has become a proficient user in a very short time. She’ll zip through a process, trying various options, until she gets a workable result.”

A naturally curious person, Saito has taken the lull in travel requests over the past 18 months as an opportunity to learn new skills, from managing social media to honing her talents as an artist. In her spare time, she creates digital “stickers,” and created emoji versions of popular Blusson QMI dogs Hunter and Hobbes for Blusson QMI’s operations Slack channel. She also enjoys marine sports, like stand-up paddle-boarding, and has been taking kickboxing classes. In high school, she started a flamenco club … despite having no significant experience with flamenco dance.

“Being a beginner is only temporary,” Saito said. “You just have to start something, just do it, and you either get better at it or you move on.”

“I think of myself as a researcher, and I am experimenting with my life,” she said. “I am always looking to see what fits, and find the next adventure.”

Her great passions, however, are travel and food.

“While I’ve missed getting on a plane and going somewhere new, there are a few places in Richmond that I like to go and watch planes take-off and land – Iona Beach is nice, and Larry Berg Flight Path Park is another great spot,” she said.

She loves to cook, but mostly because she loves to eat. On Instagram, she has an account called “KahoActuallyCooks,” which documents her efforts to get back into the kitchen after many months of defaulting to UberEats in the early stages of the pandemic. She enjoys cooking Japanese food the most, and recommends make-ahead dishes like onigiri, hand-sized rice balls with various fillings, which she has been tucking into her purse to bring to campus as she has returned to working on-site a couple of days per week.

Kaho looks forward to reconnecting with her colleagues in person. A great way to start a conversation? Ask for a restaurant recommendation.

“There are so many great Japanese restaurants in Vancouver,” said Saito, who particularly loves sushi – while she has enjoyed her time in Canada, she prefers Vancouver’s sushi scene to Toronto’s. “I love to talk about where to eat – either my favourite places, or yours!”