Researchers in Ke Zou’s lab have grown the first monolayer two-dimensional (2D) material that is both metallic and has an out-of-plane magnetization vector. Published this month in npj 2D Materials & Applications, the findings fill an important gap in our synthesis of itinerant single-layer materials and their properties.

A theory, known as the Mermin-Wagner theorem, ruled out magnetism in isotropic 2D quantum mechanical systems.

“The 2D Mermin-Wagner theorem states you cannot have a spontaneous breaking of continual symmetries in an isotropic system at non-zero temperatures,” explained lead author Ryan Roemer, a PhD student supervised by Zou, Assistant Professor in UBC’s Department of Physics & Astronomy. “Magnetism is a type of order which breaks the rotational symmetry.”

The theorem references a system described by the Heisenberg model, which is a statistical model used to describe systems in which the electron’s spin may point in any direction.

After the initial excitement around the Mermin-Wagner theorem receded, there were a few outlying researchers who believed that magnetism was possible in 2D materials, but under specific circumstances; the challenge lied in building a system that was not governed by the restraints imposed by the Heisenberg model.

“We knew we had to introduce anisotropy,” said Roemer. Anisotropy, which breaks inherent directional (spatial) symmetries, can be introduced through many channels. 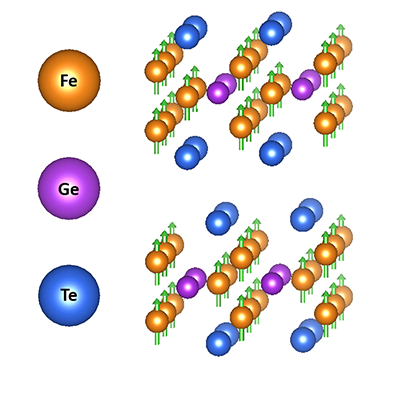 The team used a property called spin orbit coupling, which occurs when the spin of the electron and its orbital angular momentum interact, and can be instigated under specific conditions when researchers introduce heavy elements—elements that are lower on the periodic table—into a material. Doing so breaks the isotropy, which may result in new magnetic properties (see figure, right).

This first represents progress in a field eager for a revolution in materials synthesis; 2D materials are a relatively new concept in condensed matter physics, and following the 2006 discovery (and subsequent 2010 Nobel Prize in Physics) of graphene, a single atomic layer of carbon thought to offer unprecedented electronic and mechanical properties, progress in so-called van der Waals materials has been steady.

First-generation 2D magnetic materials were developed using a process known as exfoliation, through which a material was generated without control over the thickness or shape. Zou’s lab is uniquely able to produce thin, flawless materials using molecular beam epitaxy (MBE), a process by which 2D layers of crystals are arranged in single atomic layers; the highly controlled process produces clean, perfect films of the highest quality.

“Considering the 2D magnets that currently exist, we were limited to those that are either insulators or semiconductors,” said Roemer. “The material that was grown in our lab is the first in which we had control over the shape and thickness of the material, and the first metal with an out of plane magnetization vector.”

Roemer’s material offers a range of potential uses, particularly in device application. The material is a candidate for use in replacing magnets in current applications, but also in new structures, such as in magnetic tunnel junctions, spintronics, and magnetoresistive random access memory (MRAM, used in data storage in classical and super computers).

“Because this is the first material grown in monolayer with these characteristics, there is no widespread application at the moment,” said Roemer. “But I am eager to consider the possibilities.”