No material in nature exhibits topological superconductivity, but a recent article published in the journal Physical Review Letters proposes an experimental pathway to probing a topological phase in copper-based materials. This new theoretical work from Marcel Franz and colleagues was conducted under the banner of the Max Planck-UBC-UTokyo Center for Quantum Materials, and is a critical piece of the Grand Challenges research program at the Stewart Blusson Quantum Matter Institute (Blusson QMI).

The theory described in the letter proposes an experimental approach based on the theoretical paper the team published in Nature Physics in February 2021. That paper proposed that combining two monolayer-thin sheets of copper-based superconductors in a twisted configuration would lead to topological superconductivity.

“We are interested in topological phases since they are novel phases of matter with potential device applications,” said Oguzhan Can, PhD student in the Franz lab and co-first author on the paper. “Our calculations show that when two layers are twisted and stacked in a certain way, a new phase of matter called topological superconductivity emerges.”

Superconductivity is a quantum state of matter that occurs at very low temperatures. The state enables frictionless motion of electrons, meaning that electrical current does not lose energy in the form of heat and can persist indefinitely. Topological superconductors are a special class of superconductors with interesting and unusual properties that could be useful in future quantum computing technologies.

This new work from Franz, Can and colleagues proposes an experiment to verify their theory that combining two monolayer-thin sheets of copper-based materials (such as Bi2Sr2CaCu2O8+δ, or “BSCCO”) in a twisted configuration will lead to topological superconductivity at potentially higher temperatures than in previously established superconducting materials, making the study of these materials more accessible for researchers and industry scientists. 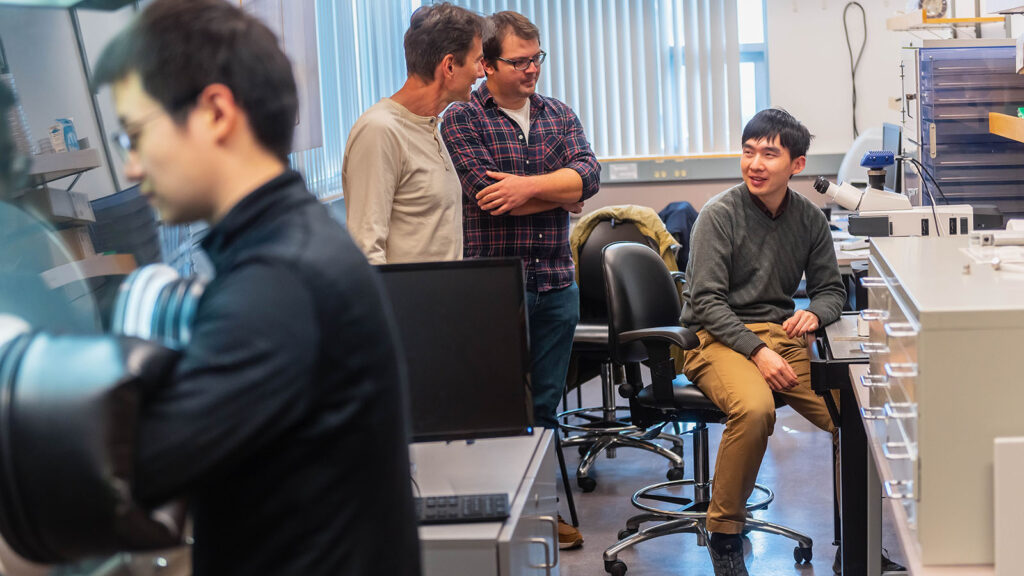 “We are measuring so-called optical Kerr effect in the light reflected off the twisted BSSCO structure,” explained Ye. “It’s a complex experiment, with many technical aspects pushing the limits of instruments, and the work is underway.”

Ye received Research Tools and Instruments funding from the Natural Sciences and Engineering Research Council in 2021 to acquire a Zero-loop Sagnac Interferometer for probing spontaneous time reversal symmetry breaking in topological superconductors, which will aid this research.

‘’The idea is that when we shine light onto a two-dimensional sample, we can compare the relative rotation of the polarization of the light upon its reflection off of the surface of the sample. This is called the Kerr rotation and it is observed when there is an effect called ‘’time reversal symmetry breaking’’ which is not present in the isolated BSCCO monolayers,’’ explained Can. ‘’However, if we consider stacking two monolayers in the twisted configuration, our earlier theory work predicts this effect, resulting in finite Kerr rotation, as the mechanism that drives topological superconductivity.”

“In this recent work, we estimate the magnitude of Kerr rotation in twisted BSCCO samples, which turns out to be quite large compared to what is expected of other topological superconductor candidates. If Ziliang’s group measures a Kerr rotation, it will be an experimental evidence towards topological superconductivity in twisted BSCCO,’’ said Can.

This research is linked with Blusson QMI’s Grand Challenge, Engineering exotic phases in two-dimensional (2D) materials. The 2D challenge seeks to uncover novel phases of matter in order to develop devices that influence future generations of quantum technologies and shed light on some of the deepest mysteries of quantum matter.