Led by Assistant Professor Ke Zou, the team has demonstrated an unprecedented degree of tunability in a system made of two inorganic compounds made of titanium oxides placed on top of each other.

“We have observed significant and emergent magnetic activity at the interface of two lab-grown oxides that have not been previously studied. The discovery has led to the development of a new system in which the magnetic behaviors could be easily tuned by very small variations,” said Dr. Zou. 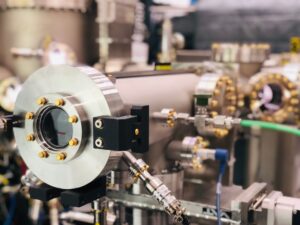 “By using the spin of electrons, we can create storage devices that use magnetism for data storage and require a significantly lower amount of energy to operate compared to their electronic counterparts,” said Dr. Zou.

“As computers grow more powerful, so does our need for more efficient data storage solutions. Spintronic storage devices made of highly tunable materials have promising applications for next-generation of computing such as quantum computing and neuromorphic computing.”

It is by the constant discovery of new magnetic materials and fine-tuning their properties that we can hope to one day create the memory devices needed for quantum computers, said Dr. Zou.

“On our side, we continue to study and design new quantum materials that could be tailored to the needs of industry partners looking to innovate in this space by collaborating with the research sector,” Dr. Zou said.

The study has relied on the expertise of several Ph.D. students, including lead author Hyungki Shin, who has now taken up an industry role as a scientist in a quantum computing company in US.

Dr. Zou’s group at Blusson QMI are experts in growing complex oxide and chalcogenide films. With access to research talent, specialized equipment and a world-leading research infrastructure, the group aims to achieve scientific and technological breakthroughs in new materials and new functional devices.

The group welcomes motivated undergraduate and graduate students and postdoctoral fellows and looks to expand research and development collaborations with the industry.

The authors are grateful for the helpful discussions with Ilya Elfimov. This research was undertaken, thanks in part to funding from the Max Planck-UBC-UTokyo Centre for Quantum Materials and the Canada First Research Excellence Fund, Quantum Materials and Future Technologies Program. The work at UBC was also supported by the Natural Sciences and Engineering Research Council of Canada (NSERC) and the Canada Foundation for Innovation (CFI). Part of the research described in this paper was performed at the Canadian Light Source, a national research facility of the University of Saskatchewan, which was supported by the Canada Foundation for Innovation (CFI), the Natural Sciences and Engineering Research Council (NSERC), the National Research Council (NRC), the Canadian Institutes of Health Research (CIHR), the Government of Saskatchewan, and the University of Saskatchewan.