The 3rd Annual QMI Retreat took place at Loon Lake Lodge and Retreat from September 27-29, with over 130 participants from QMI research groups, technical and business operations. The purpose of this three-day event is to build a culture of collaboration and respect, while fostering a sense of pride in our achievements as a scientific institution. The first Retreat occurred in Whistler while last year’s retreat took place at the same location (but under much damper conditions).

During the first evening, following an overview of recent developments in growth and strategy, members had the chance to socialize during activities such as volleyball, basketball, and bonfire-making.

Saturday morning focused on developments in research and infrastructure, with the Grand Challenges providing a framework for a series of presentations and Q&A sessions.  The afternoon involved experiential team-building activities coordinated by Pinnacle Pursuits, the most popular of which was archery and the wettest—rafting. Members also had the opportunity to try high ropes and rappelling, while canoeing and paddle-boarding remained popular activities in spite of some strong winds.

After dinner, Stephen Murgatroyd from Open University presented a talk, “Innovation at the speed of light” which can be downloaded here.

Sunday talks included a presentation by Donovan Hall, from Physical Review Letters. Hall completed his PhD at Louisiana State University and spent five years at the National High Magnetic Field Laboratory in Tallahassee, Florida, primarily conducting magnetic measurements on strongly correlated materials. Donovan was also able to attend the day’s scientific talks and shared some of his observations during his tour of QMI following the Retreat:

“Seeing the talks yesterday, I realized that what we’re doing in fundamental physics is really connected to what we’re doing in industry and applied physics. I think it’s a really good idea to get all these people together – people with different backgrounds – all in one place so that it breaks down the barriers.

“The sense I’m getting here is that you have some talented people who know how to make complex materials almost by design, and you have people who do characterization, and then applications people—you have these people all in the same place, and I can see that it’s a challenge to get everyone talking the same language.”

The Retreat wrapped up after a presentation about quantum computing research by Karl Jensen, Lukas Chrostowski and David Weekes.

The QMI Retreat is an event that takes months to coordinate, much of it due to the tireless efforts of the Administration Team and Kassandra Darbel. Providing feedback on the experience helps the Team to figure out logistics for the next Retreat. For those QMI members who have not yet participated in the post-event survey, please share your thoughts by completing a survey.

Stewart Blusson QMI would like to thank all attendees for their participation. We look forward to hosting the next one in 2020 but in the meantime, you can view images of the event taken by UBC photographer Paul Joseph. 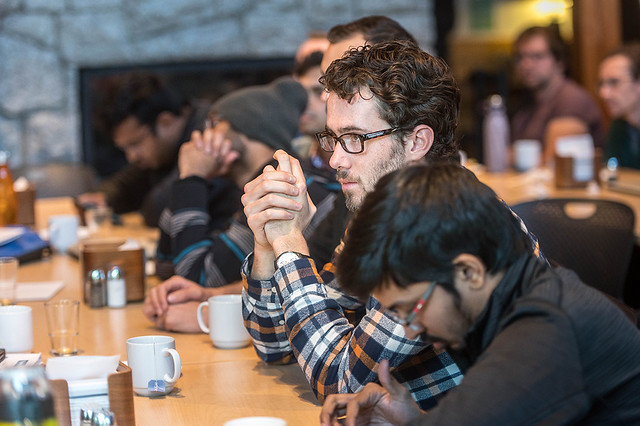