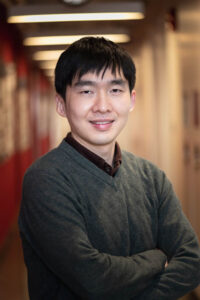 New research from Ziliang Ye’s laboratory at the Stewart Blusson Quantum Matter Institute, published today in the journal Nature Photonics, demonstrates a spontaneous polarization-induced photovoltaic effect in a potentially programmable semiconductor material. These findings are based on a specific lab-grown crystal phase called rhombohedral molybdenum disulfide, and they demonstrate promising optoelectronic properties that do not exist in the material’s usual thermodynamically stable (hexagonal) phase. This work is among the first experiments in the world to achieve ferroelectric spontaneous polarization via a designed stacking order between atomic layers, which could one day be used to build high-speed photodetectors, flexible biosensors, or more efficient optical energy harvesters.

“This is the first observation of an intrinsic photovoltaic effect in a van-der-Waals (vdW) material, which has layered structures, designed with an intentional stacking order,” said Ye, an Assistant Professor in UBC’s Department of Physics and Astronomy. Photovoltaic materials convert light into energy. Research elsewhere has demonstrated ferroelectric behaviours in artificially stacked crystal layers, but this is the first time that researchers have been able to demonstrate the effect in a single lab-grown crystal. “The effect is new, and by developing a naturally stacked material in the lab rather than manually stacking layers one by one, we were able to achieve a scalable structure with perfect alignment and a very large domain with high efficacy.”

“The idea arose from broken inversion symmetry, similar to artificially stacked crystal layers,” said Dongyang Yang, a graduate student in Ye’s lab and co-first author. “The difference is that now we are using a single molybdenum disulfide (MoS2) crystal with homogeneous spontaneous polarization throughout.” 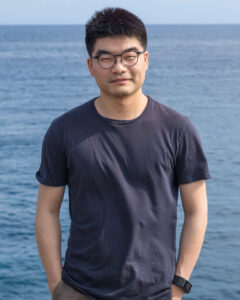 The team, including Yang and co-first author, postdoctoral fellow Jingda Wu, have partnered with colleagues at the University of Tokyo, who have grown the 3R-MoS2 crystal in their lab, to develop a device that harvests the spontaneous polarization for photovoltaic applications. Using a single crystal not only greatly eases the fabrication process, but also eliminates misalignment problems commonly seen during manual stacking. Therefore, it has great potential for large-scale semiconducting devices, not limited to photodetectors.

Ferroelectricity has been studied for decades in oxide materials: recently, researchers around the world, including Ye’s team at the University of British Columbia, have realized that it can also be found or realized in vdW materials.

“Our discovery is a good supplement to the studies in this community,” said Yang.

“Compared to ferroelectric oxides, which are normally transparent to visible light, 3R-phase vdW semiconductors can absorb wavelengths ranging from visible to infrared,” said Wu. “This greatly expands the use of ferroelectrics in optoelectronic applications.”

Ferroelectric memory by itself is a very important topic in industry, and the team’s findings could potentially lead to photodetectors with memory capability. Ye and colleagues are working with a theory team, led by Marcel Franz to reveal more secrets about this material.

While Ye’s team has observed efficient photocurrent generation in their research, further studies are needed to make it practical for actual photodetection applications.

“Our ongoing study shows some evidence that this kind of device has a very fast response speed,” said Wu. “It has the potential to be used in next-generation high-speed communication applications.”