New research from Ke Zou’s team at the Stewart Blusson Quantum Matter Institute (Blusson QMI) has offered new perspective on the mechanism of the enhanced superconductivity in thin film superconductor FeSe/SrTiO3. The paper, published this week in Nature Communications, provides new insights into the electronic structure of the material, and the physical origin of its photoemission replica bands.

“Energy bands” describe the energy and momentum distribution of electrons in a given material. Replica bands are shaken off from the original bands by passing an energy from electrons to phonons. This phenomenon is unique among superconducting films, in that it has only been observed on monolayer FeSe on oxide substrates.

This new research, led by first-author and Zou lab postdoctoral fellow Chong Liu, used a novel experimental approach to examine a pair of existing theories for this thin film’s specific behaviours. The experiments were conducted at the CFI- and BCKDF-funded Quantum Materials Spectroscopy Centre, a state-of-the-art beamline facility developed at the Canadian Light Source (CLS) under the leadership of Andrea Damascelli, Scientific Director of Blusson QMI, where Liu and colleagues were able to employ polarization-dependent angle-resolved photoemission spectroscopy (ARPES) to examine the intensity of the replica bands.

Polarization-dependent ARPES gives a much clearer perspective on individual energy bands, reducing the background and enabling researchers to observe the true intensity of the replica bands in the photoemission spectrum. This research, conducted at CLS in 2019, represents some of the earliest work done using the beamline after it opened.

“This is the first time we were able to demonstrate experimentally in this material how an electron can excite multiple phonons, losing energy multiple times,” said Liu. 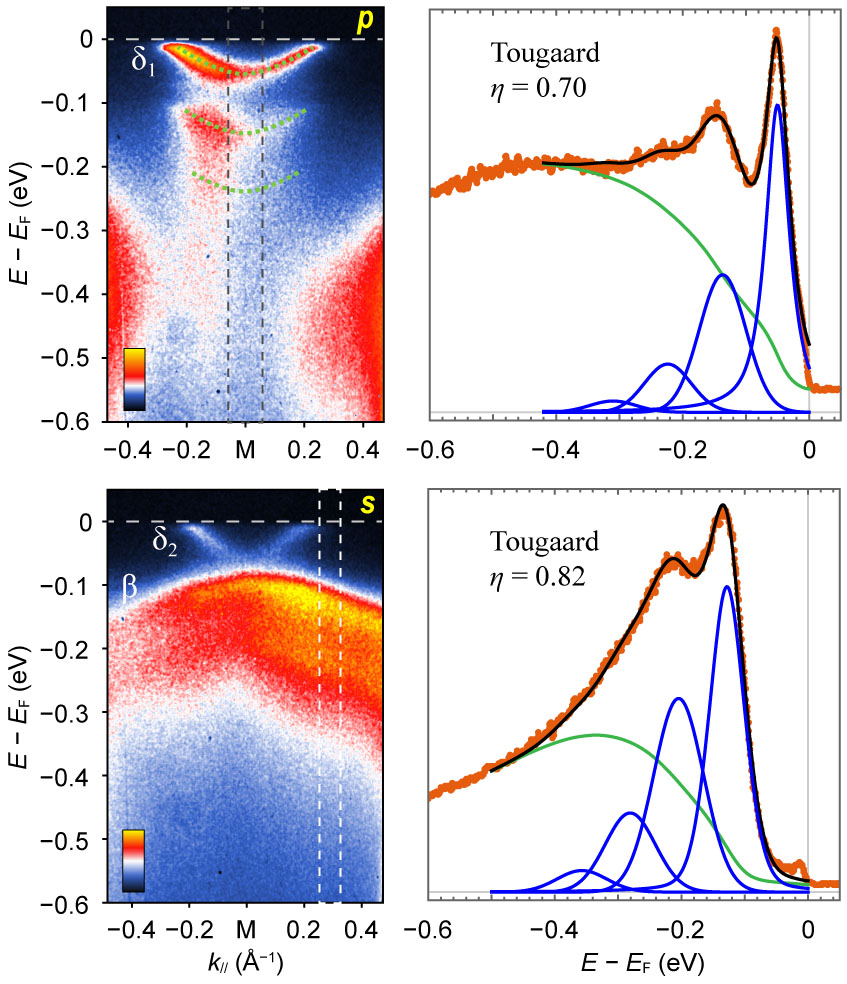 However, this observation has also resulted in new questions. The results Liu and colleagues were able to achieve now cast doubt on some earlier held conclusions.

“The intensity of the replica band is much higher than we originally thought, higher than the previously predicted value, and this may call for new modifications of existing theories,” said Liu. In previous research, the highest intensity recorded was about 0.2. “No matter which background we chose, the replica intensities we extracted were higher by at least a factor of two.”

Liu has been studying FeSe/SrTiO3 since 2014, when he was a PhD student at Tsinghua University in China. He began his postdoctoral fellowship with Zou at UBC in 2018, and this material and its properties have been the primary focus of his work. This paper builds on a theory proposed by George Sawatzky and Fengmiao Li that the replica band process could be extrinsic, occurring after the electron has been excited by a photon.

“Using the synchrotron light source at CLS, we were able to choose different polarizations of the photons, which gave us a big improvement on the data, which is the key to getting the clear replica bands,” said Liu. “Now we can see that the puzzle still lingers: the intensity of the replica bands cannot be fully explained by the either intrinsic or extrinsic scenarios, so it’s too early to draw a conclusion. We may need more theories to explain what is going on.”

The Canadian Light Source at the University of Saskatchewan is a national research facility, producing the brightest light in Canada—millions of times brighter than even the sun. One of the largest science projects in our country’s history, the CLS hosts annually more than 1,000 scientists from around the world who use our light to conduct ground-breaking health, agricultural, environmental and advanced materials research.