Frustration reveals the cracks where the light gets in 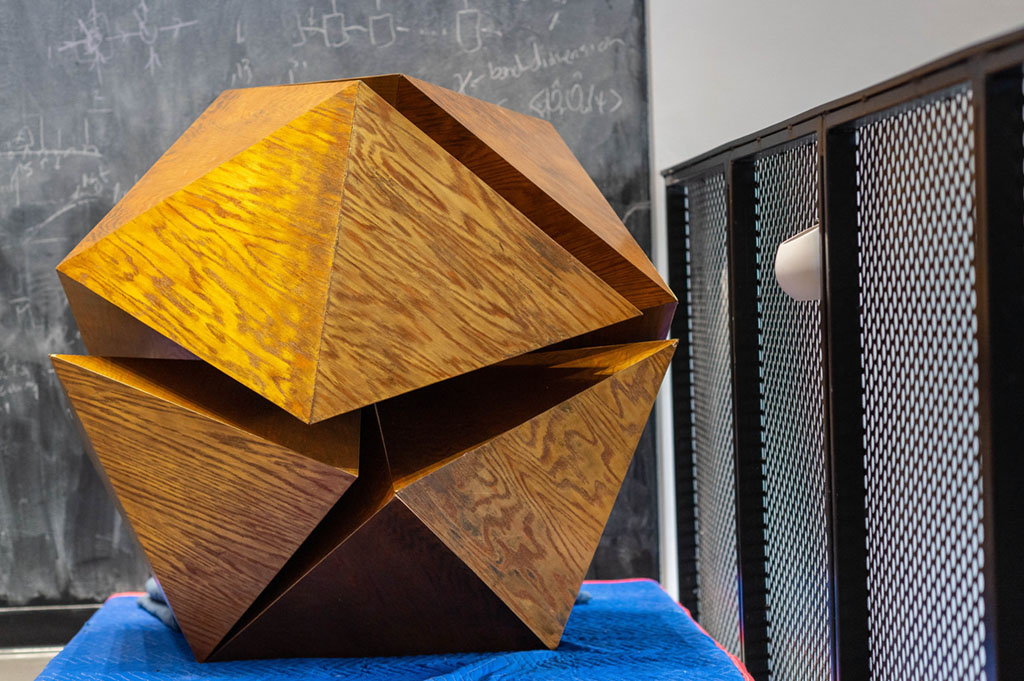 “One of the important purposes of art is to transform spaces by making novel phenomena visible,” said Pamela Davis Kivelson, the artist behind the sculpture The Frustrated Icosahedron. “That, and to face uncertainty and then turn that uncertainty into creative exploration.”

The Frustrated Icosahedron is currently situated at the Stewart Blusson Quantum Matter Institute (Blusson QMI) on the third floor of the Brimacombe Building, at The University of British Columbia (UBC), where it was assembled in late 2021. The piece, a structure comprised of 20 gilded tetrahedra, was assembled to form an icosahedron that doesn’t quite fit together; seams where the tetrahedra do not quite align reflect geometric constraints rather than flaws in the assembly.

Kivelson is interested in art that inspires awe: art should create opportunities for connection and conversation, and a sense of wellbeing that extends beyond the individual for the benefit of the community.

“When the Icosahedron is packed, it’s pretty compact and small, but there’s something about the experience of putting it together that’s very beautiful, and it cannot be done alone,” said Kivelson.

“When you put it together, it takes up a lot of space; I think about how when you’re working on something together, it’s bigger than one idea. You’re all sharing in creation. You’re co-creating an experience. When the viewer encounters The Frustrated Icosahedron, they need to puzzle it out, and that can be a connecting and hopefully joyful experience,” said Kivelson.

The Frustrated Icosahedron came to Blusson QMI in 2016. In late 2015, Andrea Damascelli met Pamela Davis Kivelson at a CIFAR meeting in Paris: Kivelson’s spouse, Steven Kivelson, is a Professor in the Department of Physics at Stanford University and an international Associate Fellow with CIFAR. Over dinner near the Arc de Triomphe, Damascelli recalls discussing his vision for the Institute – at that point, Blusson QMI didn’t have a completed building, and had only just been awarded funding through the Canada First Research Excellence Fund (CFREF).

“It was the beginning of Blusson QMI as we know it today,” said Damascelli. 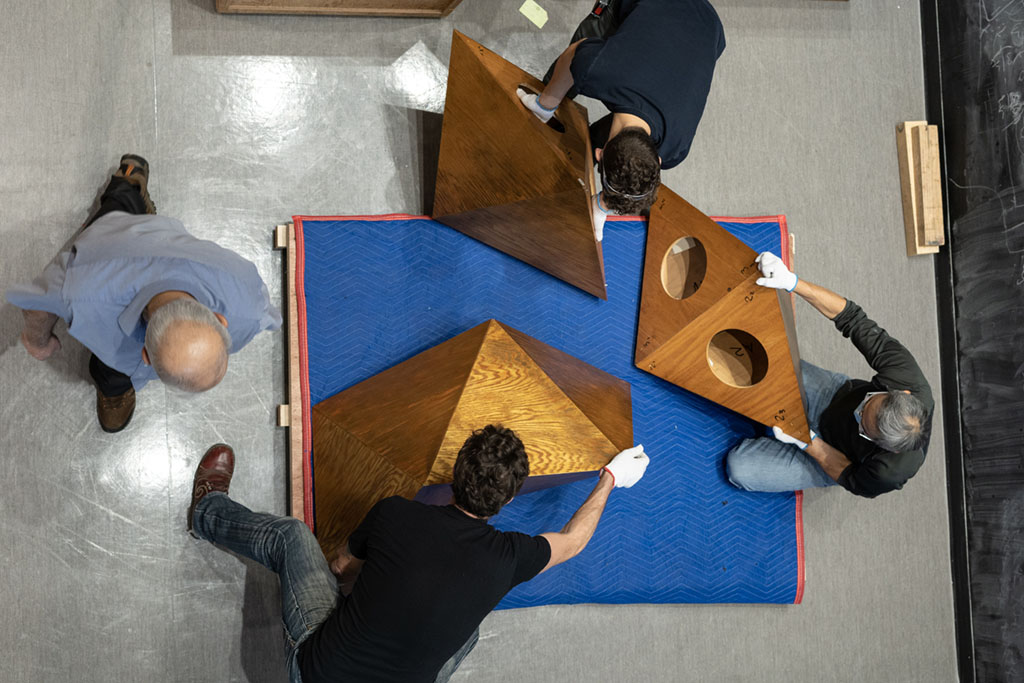 Those working in the building late last year may have observed the commotion as James Day, Pinder Dosanjh, Doug Wong, Tim Warkentin, and Andrea Damascelli worked to unpack and assemble the sculpture. Jingda Wu, a photographer as well as a postdoctoral fellow in Ziliang Ye’s laboratory, took pictures as the assembly progressed. As the team worked to assemble the tetrahedra at first, and the icosahedron days later, the effort resembled a dance as people joined in to help and as curious passersby stopped to ask questions or make suggestions, and as the pieces moved as the sculpture came together.

The sculpture will ultimately be suspended from the second storey over the lobby. 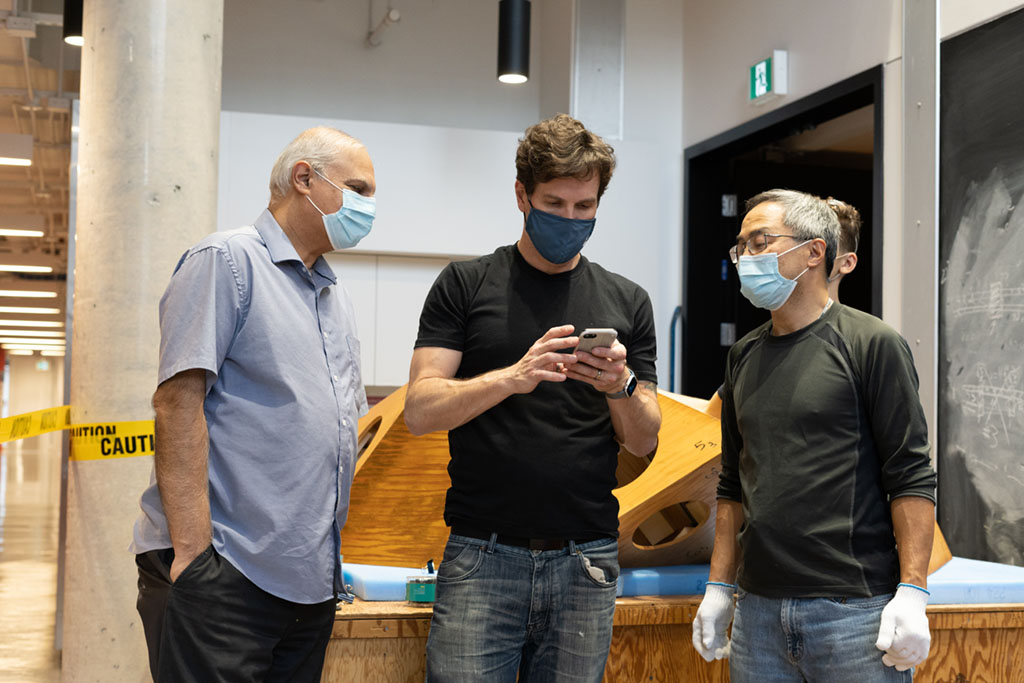 Left to right: Pinder Dosanjh, James Day, and Doug Wong discuss the best way to assemble the sculpture during a pause in activity on November 26, 2021. Image credit: Jingda Wu. 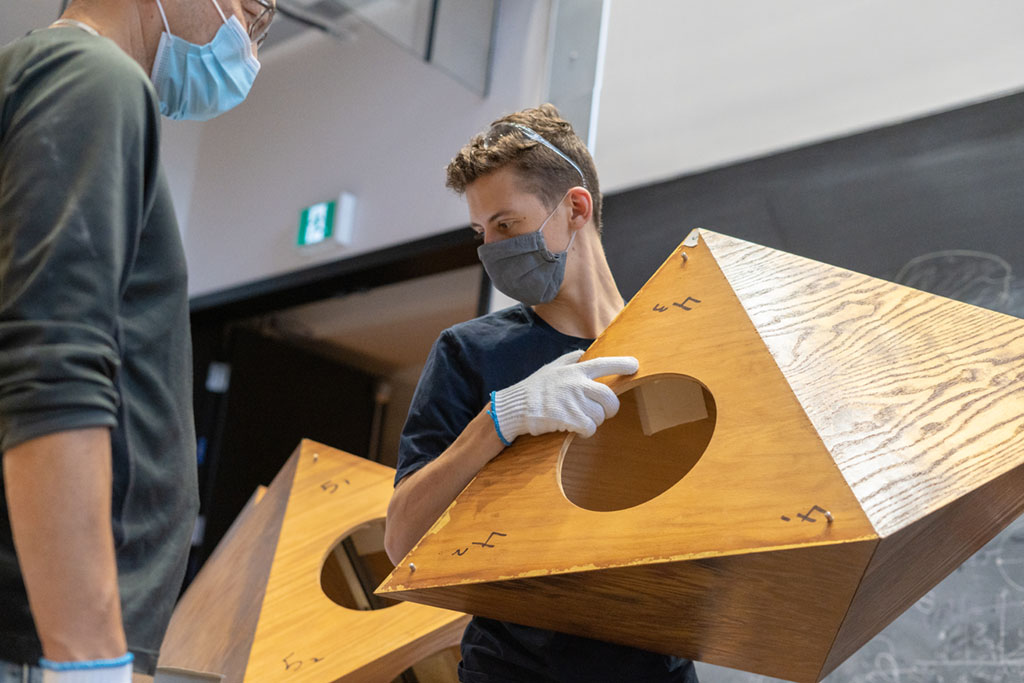 Timothy Warkentin moves a complete tetrahedron to a safe place for storage as the rest of the sculpture comes together. Image credit: Jingda Wu.

“The act of working together, of assembling the sculpture, becomes this sort of singular moment that can’t be recreated,” said Kivelson. “But the memory can be very, very impactful⁠—like an ‘art shadow’ that extends out from the work, personalizing it.”

An icosahedron is a shape with twenty triangular plane faces, and while there is little in the macroscopic world that takes this shape in nature, it is not uncommon in miniature; some crystals, molecules, and viruses appear as icosahedra. By enlarging the piece, Kivelson has created something almost other-worldly and mechanically complex: it isn’t intuitive, and that’s the point. 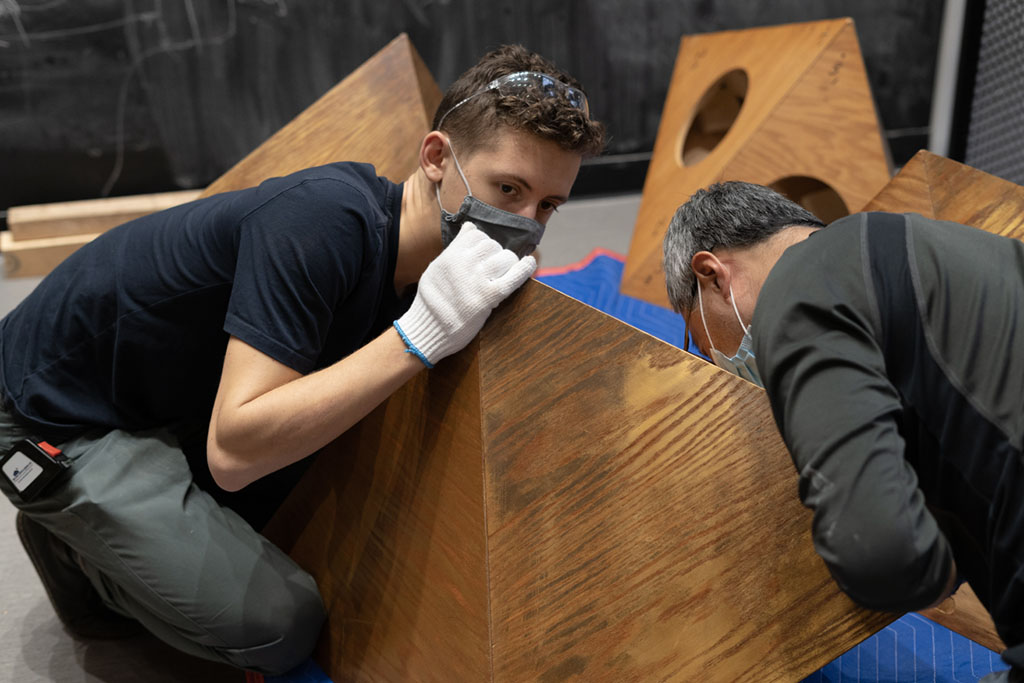 In physics, frustration refers to conflicting forces that individually favor different arrangements of constituents (e.g. magnetic moments), and hence that result in complex structures. In the book Statistical Mechanics: Entropy, Order Parameters, and Complexity1, author James Sethna describes a kind of frustration in relation to The Frustrated Icosahedron and another of Kivelson’s works, The Orange Peel Carpet, as a type that “arises when the energetically favourable local packing of atoms or molecules is incompatible with the demands of building large structures.”

“Frustration can lead to energetic instability, and eventually to a phase transition,” said Damascelli. “And this is how new and exotic states of matter can be discovered and established.”

In the same way that The Frustrated Icosahedron reveals the limitations constraining the formation of a cohesive structure out of twenty tetrahedra, Kivelson’s The Orange Peel Carpet (pictured below) represents the frustration that occurs when one tries to flatten a three-dimensional curved object while trying to retain its shape: imagining forcing something to take a shape it doesn’t organically favor is a way of relating the meaning of frustration in its scientific and conventional definitions. 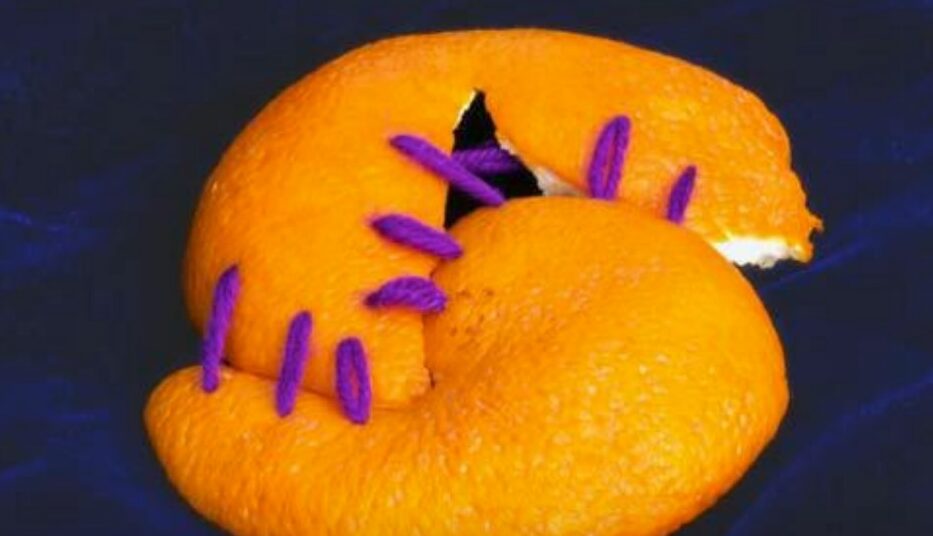 Frustration can feel like an individual barrier to progress, but Kivelson’s work aims to build connection, both between art and science and through collaborative works, including The Frustrated Icosahedron. Perhaps frustration is a catalyst: we spark creativity when we work together. If we look differently at what we think of as flawed, we can find beauty to admire: imperfections give art meaning.

“What I like about this piece, with its cracks and seeming imperfection, is that it connects to the experience of being a researcher, the desire to understand the universe and our place within it, a process that comes with a full range of emotions – from stress, frustration, and pain, to excitement, liberation, and hope,” said Damascelli. “And after all there is a crack in everything, as Leonard Cohen wrote, that’s how the light gets in.”

“When you’re trying to figure out how these pieces fit together, you reach into your subconscious to come up with associations and recollections and images,” said Kivelson. “I think there’s something really wonderful about the fact that this object has such a rich history, and so many intersections with different physicists and publics. The Frustrated Icosahedron is, in a way, a symbol of working together to solve problems that we cannot fix on our own.”

For more of Pamela Davis Kivelson’s work, see her upcoming exhibit at Stanford University and her fall physics colloquium; details to come.

More information about The Frustrated Icosahedron and Pamela Davis Kivelson: