A new mobile application gives users the opportunity to engage with quantum computers in an accessible, gamified way. The app, Quantum Arcade, was developed in partnership between Quantum BC’s Diversifying Talent in Quantum Computing program and UBC Geering Up; the team launched the beta version this month for use on iOS and Android devices and is currently seeking Quantum Arcade beta testers to play games on the app and test its user experience and functionality. 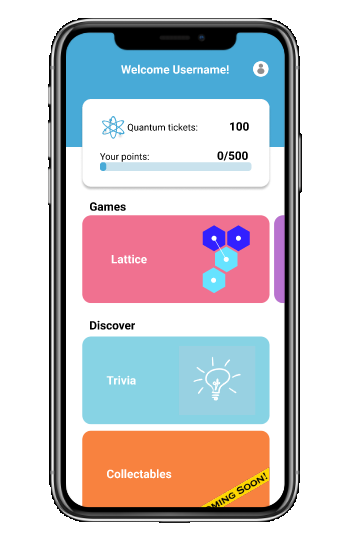 While the app was designed primarily for kids aged 13 and up as part of Quantum BC’s quantum computing K-12 outreach effort, the design will appeal to a general audience.

“Quantum computing is a challenging field to enter, particularly for those not already familiar with complex physics, mathematics, and coding. Not everyone has access to experts, not everyone lives in an area that offers quantum computing workshops. We developed this application to be a widely accessible, free educational tool, teaching concepts in quantum computing to anyone with a smartphone,” said Haris Amiri, formerly the Project Manager for Quantum Computing Outreach. “We’re proud to be the ones to launch the first and only available quantum computing mobile application that actually runs on a quantum computer that the public can access.”

The app interfaces directly with D-Wave’s 5000-qubit quantum computers. Users receive “tickets” as they play through the arcade-style games, which they can cash in to run the “quantum solver” when they get stuck as game levels become increasingly complex. In one game, users can test their intuition by playing against a quantum computer programmed to identify optimal moves.

“The games are essentially optimization puzzles; in the lattice game, for example, the goal is to orient the board so it has the lowest number of potential conflicts between nodes on a lattice,” said Amiri. “The point is to get people to think about the kinds of problems that a quantum computer can solve and understand the limitations.”

In addition to introducing some applications of quantum computing, Amiri hopes that the app will also function as a source of inspiration for a future generation of ‘quantum’ developers.

“We’re looking to normalize quantum computers, and build intuition around how they function and what they can be useful for,” said Amiri. “Think about the ways we (the general public) first engaged with computers – for many it was through games like Pong. We’ve come a long way from Pong.”

“Empowering youth with access to quantum computing education programs and apps like this is a great way to get them comfortable and familiar with the fundamentals of an emerging technology”, said Amiri. “Maybe the presence of Quantum Arcade sparks something in someone’s imagination, and they apply their creativity to build on our work, and we start to discover new possibilities. We want to show young, talented developers that you can find creative ways to engage with quantum computers today, and we’re hoping more freelance developers and students create their own similar apps!”

“Nothing like Quantum Arcade exists right now, but this is an important start. Tools like this are organic ways to train the next generation of developers and engineers, the people who will use quantum computers in a really user-centered way rather than specifically for business solutions or research,” said Amiri.

“This is an incredible effort, and I am grateful for the work of our team of volunteers, staff, and collaborators at DWave and Microsoft in building Quantum Arcade,” said Lukas Chrostowski, principal investigator and project lead.

To sign up to test Quantum Arcade, register online. The full version of the app will be available in the fall.

About Diversifying Talent in Quantum Computing

The Diversifying Talent in Quantum Computing (DTQC) program at UBC brings quantum computing to kids through quantum kits and curricula teachers can adapt by age and grade. Programming is uniquely designed to nurture young people’s interest in quantum information topics through their formative years. DTQC is led by Lukas Chrostowski, with co-investment from the Canadian Digital Technology Supercluster, and in partnership with colleagues in academia (UBC Geering Up Engineering Outreach) as well as from industry (D-Wave Systems and Microsoft).