Sam Mugiraneza found direction and support through mentorship and the Quantum Pathways program at UBC.

“I really enjoyed chemistry, particularly theory,” said Sam Mugiraneza. But while he enjoyed studying theory, he had no idea what a chemist would do or what would be some applications of the theory that he was studying; he was curious about the applications of chemistry in the real world.

“We had a standard lab in school which had acids and bases, we would do simple experiments (acid-base titrations) to pass the exams, but beyond memorizing concepts to pass the exams, we did not have a visual picture of what opportunities a degree in chemistry could bring in the future,” said Mugiraneza, a UBC undergraduate and Quantum Pathways student who came from Rwanda to study in Vancouver. “Even the teachers had gone through the same system and thus were limited by their own experience and couldn’t explain fully the many applications of chemistry.” 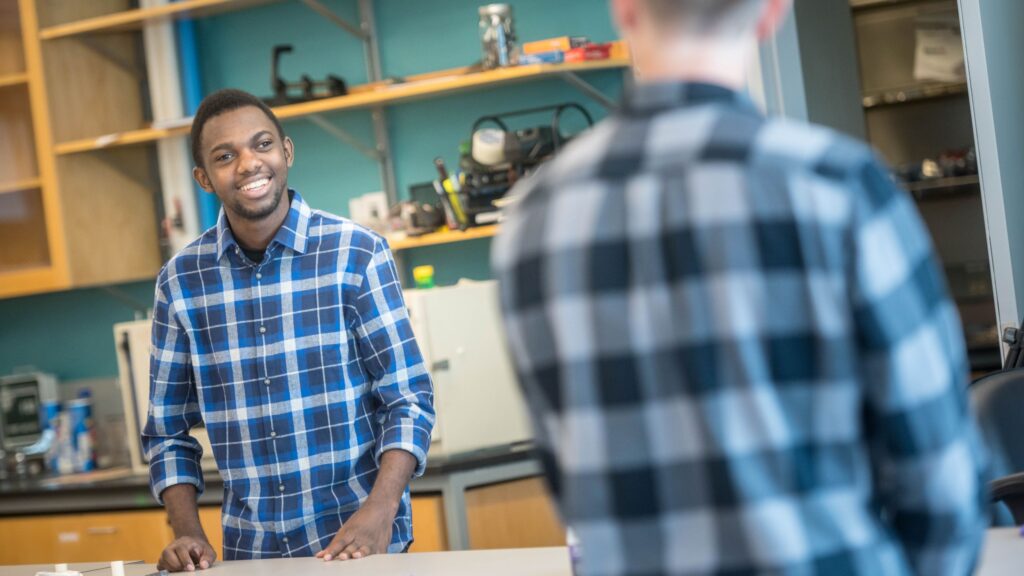 At UBC, Mugiraneza saw a world of opportunities, but was more confused than ever.

“I started seeing interdisciplinary connections: chemistry with physics; chemistry with biology, and chemistry with material sciences. That was the most interesting thing to see in my first year as an undergraduate student,” Mugiraneza said. “Seeing all these possibilities, I started becoming curious and confused and asked myself what am I doing with this subject?”

To gain clarity, Sam started attending lectures and seminars and speaking with faculty members, which led him to find out about research at the Stewart Blusson Quantum Matter Institute (Blusson QMI). Sam enrolled in Blusson QMI’s Quantum Pathways program in his second year of undergraduate studies.

“As a Quantum Pathways student at Blusson QMI you have lots of opportunities to try out different things,” said Mugiraneza, who started working in Doug Bonn’s lab where the research work was more centered around physics; after seeing Mugiraneza’s passion for chemistry, Bonn introduced him to Alannah Hallas. 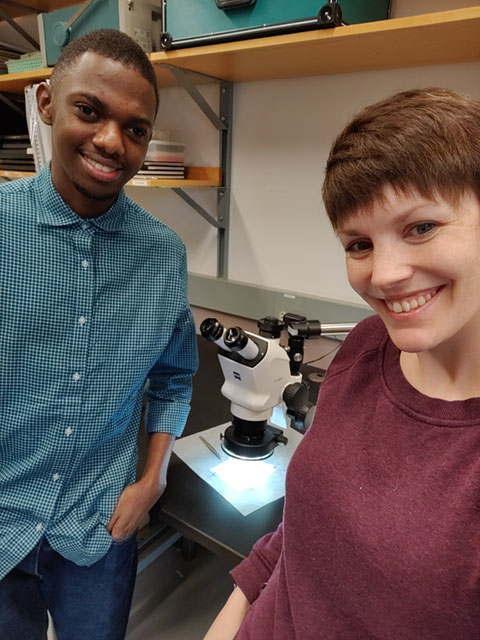 “When I met Alannah for the first time, she explained her research in an easy way, so that I could understand things clearly. I remember her explaining a concept of magnetic frustration, a phenomenon that I had never heard before, using a piece of paper. That gave me a clear introduction because sometimes you get lost in advanced terminologies and, the way she explained things simply, it spoke to me,” said Mugiraneza. “I understood that they designed materials and then characterized and measured their properties. It seemed like something that I was looking for.”

Mugiraneza credits some of his growth and clarity (and his passion for scientific research) to his time at Blusson QMI and, to the opportunities and mentorship that he received from his PIs and peers, and also through informal conversations that he had in the hallway.

“With great mentorship everything becomes easier and more enjoyable,” said Mugiraneza. “Being so far from home, it has been a joy to find that I have liked my workplace! From staff to students, post-doctoral fellows and faculty members, everyone at Blusson QMI has been really supportive.”

Mugiraneza is now in his final year as an undergraduate student at UBC and has returned to work at Blusson QMI as a part time Research Assistant in Solid State Chemistry in Hallas’ lab. His research project is entitled “Synthesis and characterization of new Ruddleson-Popper Phase quantum materials.”

For Mugiraneza, the Quantum Pathways program offered mentorship, connections, and a sense of clarity around a future in science. He is now working on the next stage of his research and education as he looks forward to graduate studies in materials chemistry, where he hopes to pursue research in energy conversion and storage applications.

“I always think of young students in my country, particularly in the rural areas, who love science but don’t see any sort of application. I have them in mind and one day I will be able to reach out to them and create a way to guide them,” Mugiraneza said. “When I look at the way everyone treated and taught me at Blusson QMI, I feel like I will also be compassionate and try to pass the spirit on to other people.”

Story by Wardah Wassim Mirza, Research Operations Facilitator. The EDI Stories series is designed to spark conversations about Equity, Diversity and Inclusion (EDI) at Blusson QMI and in science. Missed the first story in this series? Read: EDI Stories: I saw for myself why science needs equity, diversity and inclusion.